Ester Quintana has been studying the social behavior, acoustics, and ecology of marine mammals, especially of cetaceans and sirenians for over 15 years. She has worked with the North Atlantic right whale, humpback whales, bottlenose dolphins, spotted dolphins, and manatees. Until recently, she was the principal investigator of a research project on right whales in the offshore waters of Nantucket and Martha’s Vineyard – an area designated for offshore wind energy development, and of a project studying the marine megafauna of the Northeast Marine National Monument. Her international work includes a long-term study on the endangered population segment of humpback whales in the tropical breeding ground off the Pacific coast of Guatemala. In the same country, she has worked with the endangered population of local manatees. Her research served as the basis to establish a marine protected area in an area identified as a manatee calving ground. 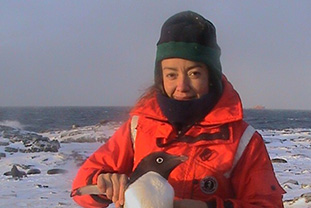